We want to be the pride of the city and the region's neighborhood theater. A meeting place for everyone, filled with events and performances that open your minds and take you into the magic of theater.
Västerbottensteatern is a county theater in Västerbotten with its seat in Skellefteå but also has many visitors from Piteå and Luleå in Norrbotten. The theater produces 8-10 new sets per year and plays approximately 400-500 performances annually in Skellefteå, Umeå and on tour in the region. We play for over 30,000 people annually.

In recent years, the theater has increasingly profiled itself as a storytelling theater where an annual storytelling festival in Skellefteå is the highlight.

Our vision is; Västerbottensteatern - The pride of the city, the region's neighborhood theater

Every summer since 1988, Västerbottensteatern has played summer theater in Skellefteå. These performances have been based on the involvement of locally anchored amateur actors who complemented the theater's permanent ensembleand created opportunities to make big, generous, productions. In 2016, the performance "En Christmas saga" was also included in such a collaboration.

Västerbottensteatern has a unique excellence in our youth-oriented department UngHästen, which since 2004 works with theater as an educational tool in high school and high school.

Our range also includes mushroom theater and after-work programs in Skellefteå and lunchtime in Umeå.

Västerbottensteatern will have brand new premises in Skellefteå's new Kulturhus which is expected to be ready around spring /summer 2021.

Västerbottensteatern is a limited company where the owners consist of Region Västerbotten and Skellefteå municipality. The theater has a corporate board, which consists of politically appointed representatives. Annual sales are approximately SEK 30 million. Västerbottensteatern is a regional theater that tours with all performances in and outside the county, apart from our summer theater. Weworks with result and goal management and establishes scorecards. The theater has about 40 employees.

premises
The theater house in Skellefteå
Our main scene is a so-called Black Box. A Black Box is a theater based on flexibility. This means that the floor is high and lowerable, the seats are removable so that you can build different stage rooms (for example, the traditional cupboard or an arena stage with seating around). Our Black Box holds a crowd of 150 people.

We also have a theater café with a small stage where you can eat or have a drink during a performance. The café can accommodate 60 people.

We also have the room The Blue Room is used for rehearsals and smaller sets, for example children's theater. Here we can take 50 people in the audience.

Other spaces
The theater house in Skellefteå also contains an office part for administration, a carpentry workshop, smithy, painting /wallpaper studio, sewing studio with a color scheme, sound-and- light studio and wig /mask department, lodges and artist foyer, conference room and a small lunchroom for staff. We also have an office in Umeå where our employees are engaged in sales, marketing and project management. 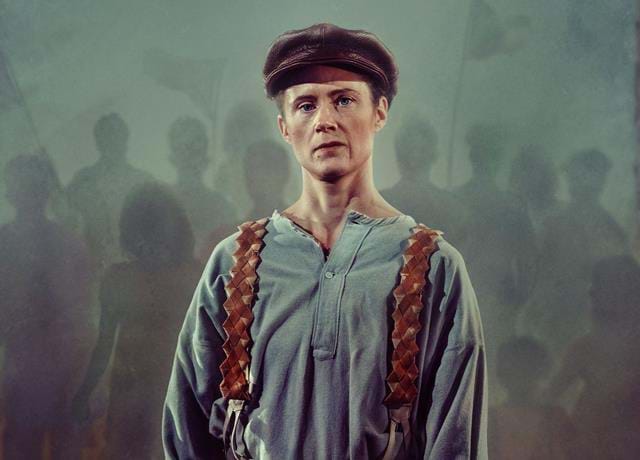 World premiere 17 nov (rehearsal 16 nov) He was a Stockholmer, because he had the fishing mask in it every now and t...
{{favourites.count()}} Favourites